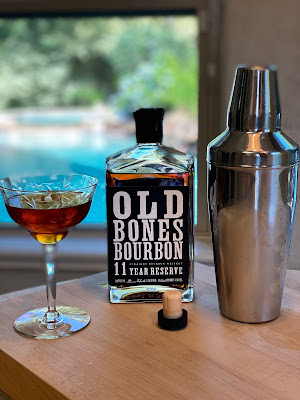 Every year on June 14, cocktail aficionados have the opportunity to celebrate America's quintessential spirit on National Bourbon Day. Bourbon has been produced in the United States since the 1700s, although the name Bourbon was not widely used as branding until the 1870s. It became officially known as America's spirit when Congress recognized it as a distinctive product of the U.S. and declared Bourbon whiskey to be "America's Native Spirit" in 1964.

Bourbon is made from a distilled mixture of grains, at least 51% of the grain mash must be corn, and it must be made in America. Other grains that may be used to complete the mash are rye, barley, and wheat, however, the more corn that is used, the sweeter the taste will be.

There are many brands of Bourbon and each seems to have its devotees. I have not pledged allegiance to any one particular label yet. My husband tends to get gifted several bottles of liquor every Christmas and we enjoy trying out the favorites recommended by friends and family throughout the year. This year's top bottle has been a premium limited-edition offering from Backbone Bourbon Company. The high rye content of this Bourbon, the mash blend is composed of 55% corn, 40% rye and 5% barley, made it a natural for use in a classic Manhattan cocktail.

The Manhattan is believed to date back to the late 1800s with legend stating that it was created at The Manhattan Club in NYC for a banquet hosted by Jennie Jerome in honor of presidential candidate, Samuel J. Tilden. Jennie Jerome would become Lady Randolph Churchill, the mother of Winston.

The original recipe called for equal portions of rye whiskey and vermouth with a dash of orange bitters while the typical modern-day recipe has evolved to a more potent mixture of 2 parts rye whiskey or Bourbon mixed with one part sweet vermouth and a dash of Angostura bitters. You can play with the portions until you find what you like best, I like my cocktails to be a bit less sweet.

For this drink, I mixed 2 oz of Old Bones 11 year old Reserve Bourbon with 3/4 oz Cocchi Storico Vermouth di Torino and added a dash Angostura bitters which I then stirred in a shaker with ice and strained straight-up into a coupe glass. It can be garnished with either a cherry or orange twist. On this day, I had neither so it remained unadorned. In the glass, it was a beautifully balanced, complex, full flavored cocktail with notes of pralines, coffee, cloves, cocoa, and orange.

This drink has high alcohol from the 110 proof Bourbon and can be quite warming. I think of this as a fall or winter-time drink, but, I knew I was staying home in the air conditioning and National Bourbon Day comes around only once a year.