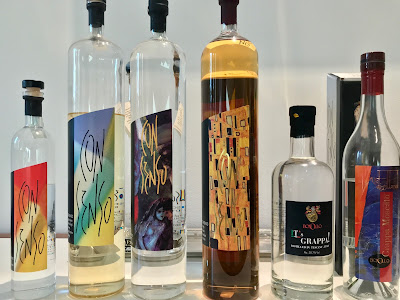 The first stop on the Grappa tour involved getting a lesson in how Grappa is made at the Bonollo Distillery located in Torrita di Siena in the heart of Tuscany. Bonollo owns five distilleries located throughout Italy that distill 200,000 hectoliters of alcohol per year which is equal to 50 million bottles. Grappa is an alcoholic beverage of Italian origin and it is their most important product. They also produce acquavitae and brandy. 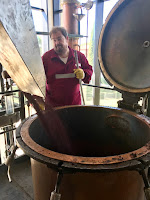 We arrived just as a truckload of pomace which is also called marc arrived at the plant. Pomace is the used grape skin and seeds leftover after winemaking. Our tour was taking place during the wine grape harvest so the distillery was operating in full swing. The distillation season is only about three months long. In addition to alcohol production,  they also collect the grape seeds during the production process to make grape seed oil, used both for cooking and in the cosmetics industry.

The pomace must come from Italy, grapes from wine regions in other countries cannot become Grappa. After the pomace is delivered to the distillery, speed is of the essence. Fresh pomace makes fresher tasting Grappa. The pomace is moved into copper stills where steam is pumped in to collect the aromatic vapors which rise into a pipe to reach the distilling column. Pot stills work in alternating pairs which is called the discontinuous method. Coffey or column stills are continuous stills that are more efficient and, as the name suggests, work continuously. Both types are used at the Bonollo Distillery in Torrita di Siena. 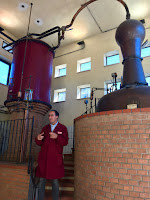 The vapors are cooled and the condensation that results drips down in three parts - the head, the heart, and the tail. The head contains the most alcohol, it is discarded. The tail contains the oilier components that will be separated out. The heart is the good stuff and it is from what the Grappa is made. After distilling is complete, the heart is stored in either stainless steel tanks or oak barrels depending on what type of Grappa is meant to be made from it. Grappa destined to be clear and sold young will go into the stainless steel and Grappa that is meant to be aged will be placed into oak barrels which will add additional aromas and flavors and help it to become smoother. 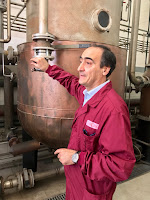 After our tour, we did a tasting of several of the Bonollo products which were served with a side of local sweets and dark chocolate. Each had a uniqueness that came from the type of grapes from which it was made and the aging process it had been through. It was a very
informative tasting.

At the end of our afternoon, we were gifted a bottle of their Consenso
Classic Chianti Grappa to take back home. This dry and elegant Grappa displays cherry cordial aromas and flavors. Serve this Grappa chilled to 48 degrees Fahrenheit, it is an ideal partner with dark chocolate and perfect after a heavy lunch on a cold day by the fire. 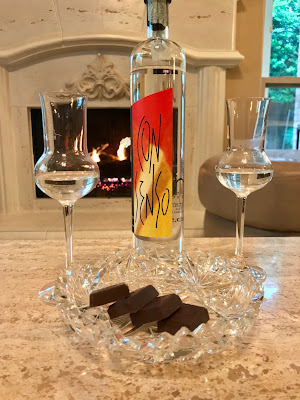 April 18, 2016
Whether you are visiting the city of Houston or live here full time, if you are a car lover, there is one thing to do this spring that is a must-do.  Visit the Museum of Fine Arts Houston to check out the temporary luxury art deco automobile exhibit, Sculpted in Steel .  I toured the display recently and was impressed by the array.  This collection is   a showcase of seventeen cars and motorcycles designed between 1929 -1940. These vehicles are more than art cars or show cars, they are true art deco masterpieces. The museum has great information about the period and designers throughout the exhibit.  Go sooner rather than later, they will only be on display until May 30, 2016.
50 comments
Read more

August 05, 2017
Refreshment on the patio of the Lobby Lounge My husband and I stayed at the Fairmont Miramar Hotel and Bungalows with our adult daughter this summer after her graduation from a Masters program at Claremont Graduate University. We wanted to be near the beach but still be able to easily get into Los Angeles to visit some of the tourist attractions. This was our first time to stay at a Fairmont Hotel . I chose the Miramar for its ocean views and its proximity to the Santa Monica Pier and the beach. It has a long history with a Hollywood connection, it has been a destination of the stars for almost a century. After looking over the various room options, I decided that the Palisade King Suite would easily accommodate us. My husband and I shared a private bedroom and our daughter got the fold out couch in the living room. The six story Palisades wing which housed our room is a historic part of the property that was built in 1924. For a more luxe experience, you can also book a pool
7 comments
Read more

August 12, 2017
We toured the Getty Villa during our recent trip to Santa Monica, it was about a 15 minute drive from our hotel. We opted to do a self-guided tour as we had not really allowed enough time for this visit. The museum is currently under construction and will be until the fall of this year so some parts were closed or not fully functional during our time there. Check the website for more information on times and schedules. Visitors enter through the Fleishman Theater which was added in 1996 during a renovation. It is constructed to look like an outdoor classical theater and they will do a live production here on weekends in September which does carry a cost. Admission is free to tour the Getty Villa but parking is $15 a car. You do need to go on-line and reserve your tickets as you have a designated entry time. They also have shows, tours and live music on their calendar that you may want to schedule your visit around, some fees may apply for those special events. The shows include a
33 comments
Read more