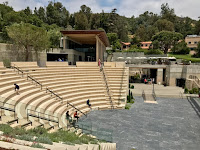 We toured the Getty Villa during our recent trip to Santa Monica, it was about a 15 minute drive from our hotel. We opted to do a self-guided tour as we had not really allowed enough time for this visit. The museum is currently under construction and will be until the fall of this year so some parts were closed or not fully functional during our time there. Check the website for more information on times and schedules. 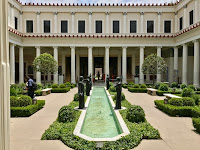 Visitors enter through the Fleishman Theater which was added in 1996 during a renovation. It is constructed to look like an outdoor classical theater and they will do a live production here on weekends in September which does carry a cost. 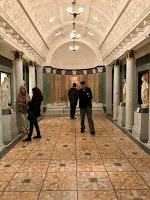 Admission is free to tour the Getty Villa but parking is $15 a car. You do need to go on-line and reserve your tickets as you have a designated entry time. They also have shows, tours and live music on their calendar that you may want to schedule your visit around, some fees may apply for those special events. The shows include a wide range of subjects like luxury art of the Incas, African masks,
and the downfall of Athens.

We focused on touring the grounds and the Villa during our trip. The Villa was constructed in the early 1970s to fulfill J. Paul Getty's dream of recreating a first century Roman country house located in Herculaneum, Italy, called the Villa dei Papiri which had been destroyed by the eruption of Mt Vesuvius. The Villa was constructed to house his large collection of approximately 44,000 objects of Roman, Greek and Etruscan art dating from 6500 BC to AD 400 and to showcase how life looked in the first century. 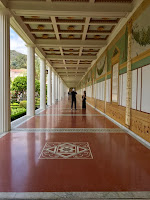 The building is beautiful with great attention to detail including things like light fixtures modeled to look like the bronze lanterns carried on the streets of Pompei. Every ceiling treatment is a work of art as well. I spent I lot of time looking up as we strolled around. Centered between the galleries is the Inner Peristyle garden which has benches for guests to rest for a moment in a very tranquil setting.

The collection of artifacts is amazing. Part of the current renovation plan is to present the works in a more chronological order than they are currently displayed. 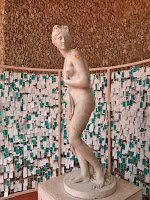 The outdoor grounds included an herb garden with herbs and shrubs that would have been used during this time period for food, medicine and
ceremonial reasons. The Outer Peristyle garden was open but the pool was empty and under repair and is expected to remain so through the fall. The space was beautifully landscaped and the sculptures kept your eyes busy. The East Garden was closed during our visit.


The Getty Villa has a Roman Holidays theme right now, it will end on September 3. They were showcasing activities that would have been done such as the ability to offer prayers to Aphrodite or have your future told by having a sheep's liver read on your behalf. There are live music and comedy performances to go along with this on 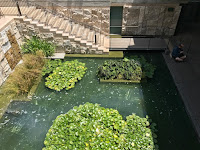 Saturdays and Sundays from 11-3.

If you are visiting Los Angeles, take a drive to Malibu and view this awe-inspiring trove of antiquities and wander the grounds while imagining yourself in another time and place, it is well worth your time. 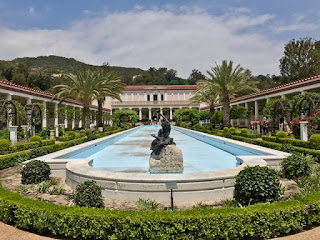