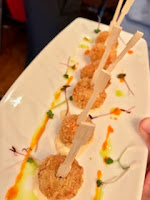 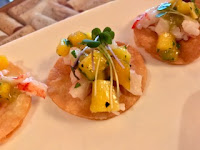 Brandani's Restaurant and Wine Bar hosted a dinner last week featuring Egelhoff Wines. It was my first time to attend a multi-course wine dinner here but that did not seem to be true for most in attendance. The house was full and the guests were meeting and greeting over passed hors d'oeuvres paired with a private label Napa Valley Sauvignon Blanc when we arrived. The mini crab cakes and the lobster mango tostada bites were fresh and delicious and perfect with the wine.

While Brandani's is a small Missouri City restaurant, the crowd was a mix from Houston and the 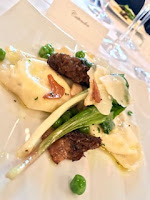 neighboring suburbs and most that I spoke with talked of faithfully attending every special dinner that Claire and Ron Brandani present. Once we were seated in the main dining room, we were served a ricotta ravioli with morels, ramps and spring peas with the Egelhoff Russian River Valley Pinot Noir 2013. This was a winning combination and plates were scraped clean. 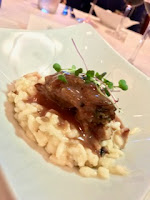 Our final savory course was a smoked buffalo ribeye with crispy tobacco onions and hand cut Kennebec potatoes served alongside two vintages of
the Egelhoff Napa Valley Cabernet Sauvignon, the 2009 and 2010. My husband has continued to talk about this course for the last week. Both wines were delicious and very similar though the 2009 was a bit smoother and fruitier.

We ended the night with Bananas Foster bread pudding with dulce de leche ice-cream paired with Walton California Tawny Style Port, a sweet ending for an incredibly tasty evening. The dessert is not pictured because I got overexcited and spooned into it before taking a good photo.

In the last six month, Brandani's has quickly become our favorite restaurant on the southwest side of town. We've eaten dinner here too many times to count in that short time period. Although this was my first and only wine dinner here so far, I am highly recommending anyone that enjoys wining and dining to get on their email list to learn about their future events. As I was repeatedly told by returning guests that night, you don't want to miss out on any of these! 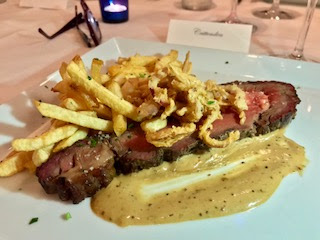 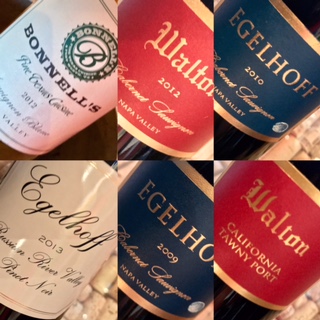