A Re-post, in memory of "The Lady of the House - Margrit Mondavi"

As originally seen at Wine-Thoughts.com.

One of the highlights of this trip to Napa Valley was the opportunity to meet Mrs. Robert Mondavi, the Vice President of Cultural Affairs at the winery that bears her husband's name. I was introduced to her at the dedication of their newest art addition. The piece was placed in front of the main entrance to honor the mind that had originally imagined and then overseen all that each visitor views upon their approach.

Margrit Biever Mondavi was instrumental in the selection of this bust of Robert Mondavi, a fittingly larger-than-life rendition of the head of the man whose mind had long ago envisioned the Napa that we see today. She discussed with me the initial difficulty in choosing the right piece of art to honor her husband as the founder of the winery.

She had originally considered a life-sized depiction of him standing with a glass of wine in his hand welcoming all who came, a memory that all who knew him would have certainly cherished. She ultimately decided that his vision, his ideas, were the greater statement on who Robert Mondavi was so she commissioned the bust to be created by artist Len Urso.

Keeping the spirit of Robert Mondavi alive and well is Margrit Biever Mondavi's greatest passion. He is still seemingly overseeing much at the winery today. His hospitality is displayed when servers bring out Moscato d'Oro slushies with dessert and quickly explain that this is purposefully done, this is how Mr. Mondavi preferred it. This well-placed faith in his decision making continues throughout. You hear it from the head winemaker as well when she discusses both grape growing and wine making decisions originally made by Mr. Mondavi that are still followed today to always ensure his preferred style.

Many that were in attendance at the dedication remembered the man that they called Bob. He was seen as a friend and neighbor throughout the region. His ideas about Napa Valley and the wines that would come to be made here were visionary. Margrit Mondavi's choice to have this thought-full man's visage oversee the comings and goings of the guests arriving to the winery while at the same ensuring their view is of the man who had the idea is a truly fitting tribute. 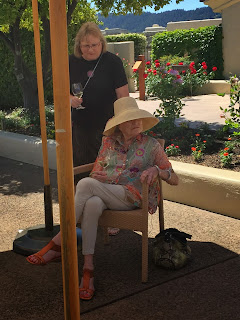 Together the couple supported the arts in the community at every level and you can see their devotion on display throughout the buildings and across the beautiful grounds. Margrit Mondavi created the concert programs that benefitted the Napa Valley Symphony and Opera. She brought chefs in from France and from across America to showcase the magic of food and wine pairing. The couple wanted to give their winery guests an opportunity to build a greater appreciation of both the wine and the culinary arts.

Many of the Food and Wine Experiences that are available today were born of her endeavors. Her sketches adorn the tops of the menus for these events. She continues her support of the arts across Napa Valley while continuing to oversee that the vision of both her husband and herself remains realized. The lady of the house was definitely in and she was a pleasure to meet.